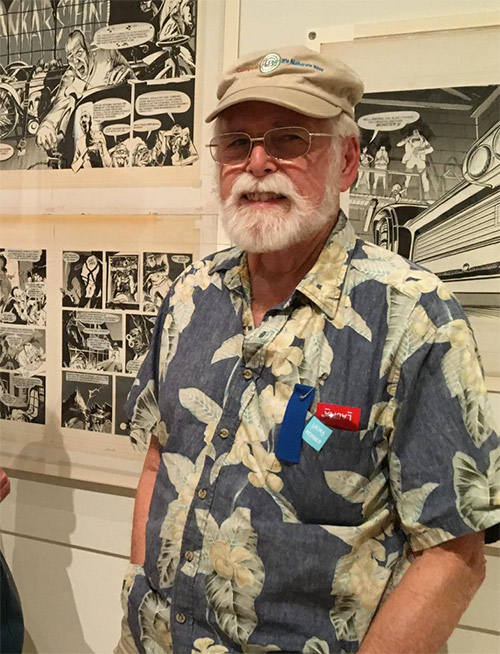 Errol was born in Los Angeles but grew up in Billings, Montana. As a teen, he developed an interest in anything with an engine. This included airplanes, sports cars, and motorcycles. His high school buddies had real hot rods. Many evenings were spent cruising and occasionally actually picking up girls “American Graffiti” style! Being an automotive enthusiast, he owned a bored out ’48 Chevy Coupe with a thunderous exhaust.

Drawing, however, was a different thing. Errol reasoned he could create anything! Becoming the school cartoonist, he spent his time in the study hall drawing cars and airplanes.

A short stint in the Air Force as an Aviation Cadet convinced Errol that he was not the military type and art school would be a better fit. Errol went back to Los Angeles to attend Art Center School, where he met his future wife, Mitzi, who was also an artist. Their first date was a hot rod show and a trip to a comic book stand; she passed the “test” in Errol’s mind, and soon, they were married. Living with someone he loved, they both found that making a living in art was possible.

Errol’s first art job out of school was as an illustrator at McDonnell-Douglas Aircraft. It was 1969, and the new 3 engine DC-10 had just come out. He quickly realized that his true talent was as a Cartoonist, not a realism Illustrator!

His first freelance comic book job came from answering a want ad in the local newspaper. It was a one-time contract entitled “Car Nuts” published by Quentin Reynolds, who had been a CARtoons regular. That job, plus an underground comic story, led to a job with Petersen Publishing. Owners of CARtoons, Hot Rod Cartoons, and Cycletoons.

Errol juggled being an artist for three magazines, plus his full-time job as an illustrator at McDonnell-Douglas. He enjoyed it all and wrote nearly everything that he created at CARtoons. Errol had a wonderful time working with the talented editors of the 3 books, Jack Bonestell, George (Pappy) Lemmons, and especially Dennis Ellefson. They later worked with Errol at Mattel.

After returning to L.A., Errol was invited to do work for Mattel by old Art Center pal, Mark Taylor, who was mostly responsible for creating “Masters of the Universe.” Not only did Errol work on the MOTU, he also did projects for Hot Wheels where he designed the “Toilet Mobile” for the “Real Monsters” toy line.

If Errol were to be asked how to proceed in the business of cartooning, it would be simple: just DO it! If you have the talent and the drive, you will get there. Errol always used the latest technology, like copy cameras, airbrushes, and zip-a-tone. Now computers have replaced those things. It’s essential to keep up with technology.

ENTER YOUR EMAIL AND GET

Be the first to know about our exclusive items and special promotions.